The Oaksterdam Cannabis Museum had its first preview showings on 4/20/2011, and allows visitors to visit from 2pm – 8pm, every Friday. 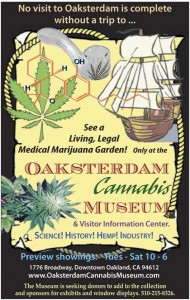 Flyer for the Oaksterdam Cannabis Museum

The Museum hosted a reception for the National Cannabis Industries Association on May 7, 2011.

Why you should join the NCIA
By Aaron Smith, NCIA Executive Director

For decades, groups like the Marijuana Policy Project (MPP), Drug Policy Alliance (DPA), National Organization for the Reform of Marijuana Laws (NORML) and Americans for Safe Access (ASA) have lobbied in Washington, DC on behalf of cannabis patients and consumers. That advocacy has helped bring policy changes and legal victories that increased medical access in more than a dozen states.

The National Cannabis Industry Assn. has now joined this effort in the nation’s capital. As its name implies, NCIA represents businesses involved in the rapidly growing cannabis industry. Its primary mission is to lobby on behalf of member businesses in DC, where it is also promoting the societal and economic benefits of the industry.

The NCIA has taken the lead in advocating for a fix to the tax code so it will not be applied to providers of medical cannabis in states where such activity is legal. Months of dedicated work by the NCIA and the businesses it represents will be rewarded soon, when Rep. Pete Stark (D-CA) introduces “The Small Business Tax Equity Act” in the US House of Representatives. Now, the work turns toward getting it enacted into law.

Never before had medical cultivators and distributors joined together to assert their rights as legitimate business people in the US. The delegation focused its advocacy on Section 280E of the Internal Revenue Code, which bars businesses involved in “drug trafficking” from deducting standard operating expenses. The IRS is using this provision during audits of California dispensaries to penalize state-legal cannabis distributors.

The NCIA contingent explained to members of key committees that the section, if fully enforced, would make it extremely difficult for medical cannabis providers following the letter of the law to compete with the still-existent underground market. This could result in the closure of the best-run and most transparent medical providers, with a loss of tax revenue for the federal government as sales shift back to the criminal market.